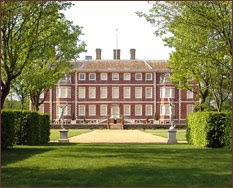 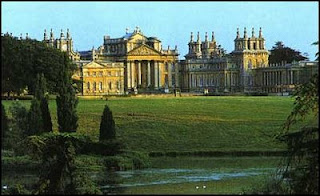 In my blog. "Take Heed of Greed," I mentioned Blenheim Palace and Ham House as typical of the type of excess Geroge Fox and other early Quakers might have reacted against. Actually, Blenheim Palace, above, was built circa 1710, so George Fox would not have seen it, as he had died about 20 years earlier. However, many of his younger contemporaries probably would have been aware of it. Ham House, the brick building at the top, was built circa 1610. What do you think? Blenheim Palace is really quite the "pile," (an example of wretched excess) as they used to say, right?

I have to repeat the question, as I think it's THE question: is the covetousness these houses represent inevitable? Can people learn to see them as prisons rather than palaces? How?
Posted by Diane at 11:02 AM

I forget whether we've talked about this before, but I really think we can be trained to change our perception. The pettiest example of this is fashion--but it's true. Have you ever remarked "Who would wear that??" only to feel somewhat fondly towards it in a few months after repeated exposure in a variety of contexts and environments? I've decided "to look upon is to love" and the longer we gaze, with unjudgmental wonderment, the more we can change our relationship...Seeing the prison-like parts of this building makes them more real/bigger ("what we look at expands") and then...and the...