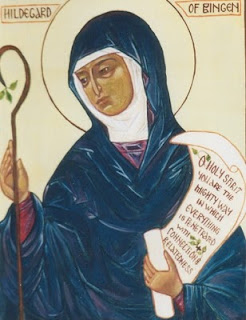 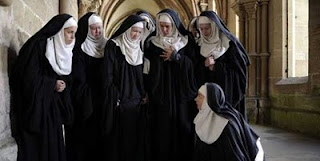 Yesterday, Roger and I saw the movie Vision: From the Life of Hildegard of Bingen, directed by Margarethe von Trotta. Hildegard was a 12th century nun and mystic, known for her visions.

The movie juxtaposes a 1950s-style Hollywood technicolor "Catholic" aesthetic with a feminist portrayal of a nun. The convent/ abbey is a somber place--lots of gray stone and women swathed in identical habits marching down corridors holding thick lit candles or surrounding the beds of dying like blue-clad vultures. Hildegard, who becomes its abbess, is a strong and serious leader and also an herbalist and healer. Some scenes show her in the convent garden gathering herbs with her nuns as she sternly quizzes them about which herb heals what ailment. In a feminine divine moment, the nuns act out Hildegard's play, Play of the Virtues, with the nuns playing the virtues, Hildegard as Anima, or the soul, and a friendly priest playing the Devil. The young nuns and Hildegard, their hair free and festooned with flowers, dressed in soft white shifts like May Day dancers, defeat the Devil and tie him up. An old nun who refuses to participate condemns the women for showing their hair.

Setting a bleak tone, the movie opens with villagers huddled in a cold church on New Year's Eve, 999, awaiting the end of the world. However, as we know, the world does not end--nor is Hildegard born for another 98 years. Following that, the opening sequences show flagellations juxtaposed with the young Hildegard being taken under the wing of the saintly and somewhat saccharine "mother" Jutta, the abbess, scenes which could easily have been lifted from a church-approved 1950s film. Not long after, Jutta dies, and we find that she has been mortifying herself with a metal mesh sash tied around her waist and working its way into her flesh under her habit.

Hildegard's visions serve to forward her own agenda. She is powerful and determined. But while she achieves her goals within the larger church hierarchy, such as establishing her own convent apart from the men, she is thwarted when her favorite nun and protege, from a noble family, is taken from her to become abbess of her own convent. Hildegard fights the transfer with all her might to no avail. This adds to the complexity of Hildegard's character. She undoubtedly is in love with the nun and selfish in wanting to keep her, as the young woman points out to her.

The film, a German production, is in German, and for anyone post-Nazi (ie., all of us) the emphasis on order, hierarchy and faceless uniformity, not to mention "mountaintop visions," carries a chilling layer of reference and serves as an implicit condemnation of the Catholic church. I have to imagine this was deliberate on von Trotta's part.

The movie was beautifully filmed, well acted and despite a slow pace, seemed shorter than it actually was.

I'm ambivalent about it however. Is it a cliche to add flagellation to a movie about medieval nuns and priests, especially when its not integral to the plot--and when flagellation did not burst into vogue until after Hildegard's death? Is it a cliche for a nun to fall in love with her protege in a strange, repressed way? Or are both realistic? Does anyone know anything about Hildegard? As a mystic, she seems a person who would be of interest to Quakers.
Posted by Diane at 9:03 AM

I especially enjoy her views of the Divine Feminine. She is a complicated figure, I think, and it is tempting to portray her as a more modern figure than she really was. Even so, I include her in my Western Civ. classes. I think it is important for people to know about her.