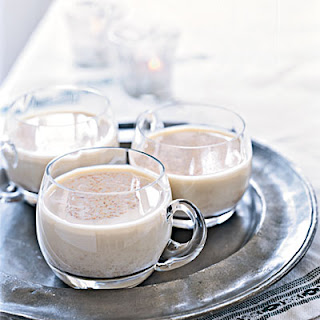 Almost every Christmas for as long as I can remember, I've had (non-alcoholic) egg nog, usually from a carton bought at the grocery store.

This year, however, I had a brilliant idea: let’s make homemade egg nog.

I looked up a recipe for non-alcoholic egg nog on the web. The ingredients were simple: eggs, whole milk, sugar, nutmeg, salt, vanilla.

I gathered six large eggs from the refrigerator and broke them in bottom of a heavy saucepan, then separated two more eggs and added the yolk. Half a cup of sugar and half a teaspoon of salt followed. I whisked this all together, then added four cup of whole milk, slowly letting it stream from the measuring cup as a I whisked it in with the eggs.

The hardest part, in these days when it is no longer safe to use raw eggs, was stirring the nog non-stop for 45-60 minutes on low heat until it thickened. Roger and I read Fanny Burney's Cecilia to each other as we stirred. When that was done, we added a teaspoon of vanilla and half a teaspoon of nutmeg and stirred.

What it tasted like was liquid custard. Our recipe called for topping it with whipped heavy cream, so we did, but that could easily be dispensed with.

The result was delicious. This is not a drink for the lactose intolerant nor the vegan, of course. Another year, perhaps, I'll tell the story of getting raw milk and free range eggs from my Amish neighbors, but this year all the ingredients came from the grocery store. With dioxides concentrated at the top of the food chain, we don’t want to be drinking non-organic whole milk on a regular basis, but once a year is probably fine.

To be honest, I had never really liked egg nog. I would drink it annually because it was part of the ritual of the holidays, but I never felt any regrets when it disappeared with the Christmas tree. It had always tasted a little weird. I now realize it's because I have been, all my life (with a few exceptions), been drinking a factory nog.

The point of this certainly is to celebrate homemade egg nog.

But it’s also for me to wonder: Why have I accepted a vaguely unsatisfying substitute for so long? I never even questioned why a drink so celebrated never tasted very good. And that leads to a broader question, which seem trite question to ask, a little bit of homey moralizing (which, of course, I would never do!) but I don't think it is. We perhaps need to keep revisiting this question in order to stay mindful, to keep from becoming complacent: Where else do we settle for a poor substitute because we never think to question what we’re doing? Do we do this with our Quaker faith? Where? How can we change?