Pilgrimage to Germany: some Berlin and Bonhoeffer thoughts 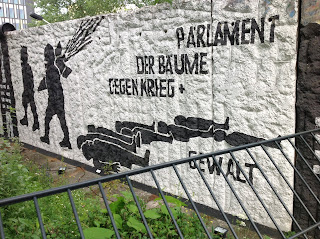 I took this photo of a preserved remnant of the Berlin Wall.
As mentioned in the previous blog, I traveled to Germany this summer to visit Bonhoeffer sites and to try to come to terms with Germany's World War II legacy. I spent more of the trip in Berlin than any other place, and had begun to just barely know and fall in love with the city when it was time to leave.

Berlin presents a paradox for the Bonhoeffer researcher. The city Bonhoeffer knew was largely obliterated during World War II. At the same time, today's reunited Berlin, vibrant, thriving, cosmopolitan and in the process of recreating itself, is probably more like the city as Bonhoeffer experienced it than at any time in the first fifty years after his death


The most awkward part of Berlin is the center, the former no-man's land by the River Spree. The Soviets built the Berlin Wall along the Spree, maintaining a dead space behind it. Today, the German government is reclaiming that dead center space, having built, among other public buildings, a huge modernistic glass and metal government office space (in a style of architecture the Nazi's would have abhorred). All the new buildings sit stiffly, as yet unintegrated into their sites. The bridges over the Spree look artificial as well, too new, like bridges over fake waterways in a Disney World. They lack the classical charm of old stone bridges I have seen in old Berlin pictures. But in time, the structures will meld gracefully into the landscape ... 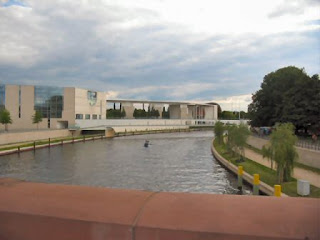 The River Spree in downtown Berlin today. Internet file photo.
The Tiergarten, the park in the center of the city, which is much like Central Park in New York City, was devastated after the war, but now is back. I was able to walk there, to my delight. Bonhoeffer must have spent time there, too, but we have no concrete record of it. The home his family first occupied in Berlin, where he lived from age six until he was 10, was near the Tiergarten. And almost surely, like many others in Berlin during the Nazi era, he must have taken long walks with friends on isolated paths in the Tiergarten in order to have conversations away from eavesdroppers and spies. 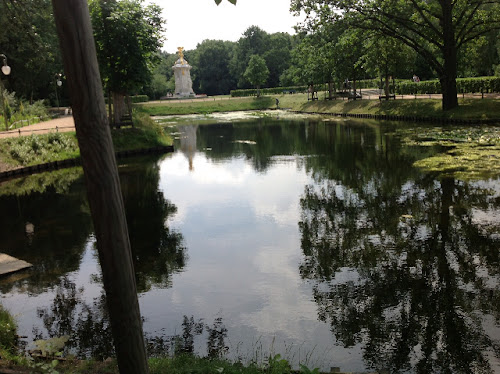 I took this photo of the Tiergarten. I wonder what Bonhoeffer would think of how it looks today?

What struck me most about Berlin was my sense that it has come to grips with its past--and that this has given it both humility (I want to say peace, but that word carries implications of complacency that are not there) and new energy. World War II is energetically present as living history, as if it happened yesterday, not more than half a century ago. My host family talked about it in an everyday way. Though most Berliners were born after the war, it's part of the fabric of their city. Perhaps this is only natural for the city that was the capitol of the country that started World War II and which suffered an almost unfathomable degree of destruction during and after it. 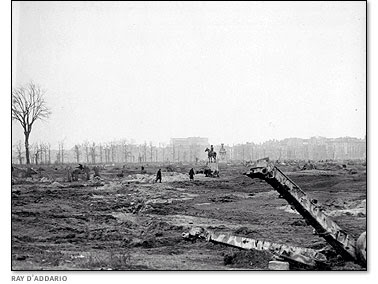 The destroyed Tiergarten after the war: ''I walked across the snowy plain of the Tiergarten--a smashed statue here, a newly planted sapling there ... and on the horizon, the great ribs of a gutted railway station, like the skeleton of a whale. In the morning light it was all as raw and frank as the voice of history which tells you not to fool yourself; this can happen to any city, to anyone, to you." Christopher Isherwood, Down There on a Visit, quoted from Eric Larson, In the Garden of Beasts

Two ways the war--always "the war"-- lives on are through stars scattered in the pavements throughout the city indicating where Jewish families once lived and where they perished, be it Auschwitz, Dachau or elsewhere. Another reminder, built against a preserved portion of the Berlin Wall, is an exhibit about Nazism spread along the ruins of the Gestapo's (always prefaced with "notorious") Prinz Albrechtstrasse prison, Bonhoeffer's last stop en route to a concentration camp. The city appears to have accepted its responsibility for the horrors its government unleashed and to have recoiled from its former embrace of militarism and exceptionalism.

It seems to me that we in this country began a similar process of self-exploration and soul-searching after Viet Nam, a process that perhaps reached its culmination in our own Viet Nam wall memorial in Washington, a place that always seems to me drenched in sadness. Then we stopped, and some people have criticized the Viet Nam memorial for not glorifying the conflict. I believe that we have not yet come to grips with how Viet Nam tore at us a nation, and that, as result, we are still living out that ideological conflict in strange ways, especially in our politics. I sometimes wonder if we will have to be brought to the brink of destruction ourselves before we can come to terms with who we are: a nation that wants to go back to the country as it was before that war or a nation that wants to embrace the changes that the Vietnamese war helped to bring? In many ways, these competing worldviews mirror those of Germans in Weimar Germany of the 1920s--some (many) bitterly hated and resisted the new society ushered in after World War I, while some embraced it. The Bonhoeffer family seems to have accepted their country's new direction.

We have two surviving letters Bonhoeffer wrote from the (notorious) Prinz Albrechtstrasse prison to his parents, where he was transferred on Oct. 8, 1944. The first is a birthday (hers) letter he was allowed to send to his mother on December 28, 1944. He says nothing of his own situation, writing only in general, if heartfelt, terms: "Dear mother, I want you to know that I am constantly thinking of you and father every day, and that I thank God for all that you are to me and the whole family." His guards allowed him to write again on January 17, because of the "People's Sacrifice," a last ditch propaganda effort to gather supplies and rally the people to defend Berlin against the Soviets. He instructs his mother to give away any clothing of his without "another thought," mentions his pleasure at receiving a Christmas letter from Maria, his fiancee, and asks for some supplies, such as books and toothpaste, indicating he was still able to receive packages from the outside. After that, silence and a series of increasingly poignant and distressed notes from his parents, obviously desperate for some word about his fate.

As I have begun reading about pilgrimage, I realized that Bonhoeffer spent much of his life as a pilgrim, roaming the world. I will write more about that in a future post.

Posted with Blogsy
Posted by Diane at 4:36 PM