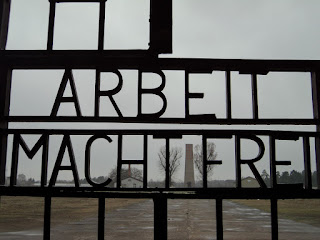 Visiting Sachsenhausen concentration camp focused me on the power of place and the ways a place can break your heart. I decided to visit this camp after my plans collapsed to tour Tegel prison, where Bonhoeffer composed what later became his Letters and Papers from Prison. I regretted not touring Tegel, but Sachsenhausen was almost as relevant to my Bonhoeffer studies, for fellow pastors Martin Neimoller and Werner Koch, and his brother-in-law,  Hans van Dohnanyi, ended up imprisoned in the camp. Bonhoeffer understood quite clearly that he too could find himself in Sachenshausen, which was so convenient to Berlin, and during a long car ride quizzed the newly released Koch at length about it. The car ride would have been necessary: discussing the camps was strictly forbidden, so the conversation would have had to have taken place in a private locale. (Part of the experience of researching Bonhoeffer is gradually sensitizing to the world of Nazi Germany, in which every action, including a car ride, is laden with multiple meaning. )

My host family found a free tour of  Sachenshausen for me. As long at least four people arrived at at certain spot in the Potsdammerplatz, a hub of downtown Berlin, the tour would go forward. I was there early, but already four people had congregated and many more came. It was still the monsoon period of my trip, so we all had our umbrellas open to protect ourselves from a steady downpour.

Our tour guide was Ingrid, a young graduate student, stocky and short with jet black hair and heavy, black-rimmed glasses. She was utterly a delight, informed, compassionate, intellectual, liberal, everything a Nazi was not, though, ironically, she spoke English with the shrill, harshly German-accented speech I connect, in stereotype, to Nazi concentration camp matrons.

She ushered us onto the tram for Orianienburg, the town just north of Berlin which is the site of the camp. We walked from the train station under drizzly skies past quaint homes built by the Nazis in the 1930s for the married SS officers who worked in the camps. The houses were designed, Ingrid said, according to the Nazi aesthetic, a folk architecture with steeply pitched roofs. They surrounded the camp on quiet residential streets, sweet little houses, on the surface.

As the rain came down harder, we were ushered into the visitors' center at the camp's perimeter, an area surrounded by high walls where the superindentent would have lived in his pleasant two-story house surrounded by meticulously kept lawns and gardens, with his goldfish pond and peacocks. SS troops in training were housed in pleasant two story barracks nearby. While I am working from memory, it seems to me this was the only area of the camp where visitors were allowed, and was used to highlight how fine conditions where in the camp. This leads me to believe there may have been some prisoner housing in this section, but of that I am not sure.

Ingrid said that this high-walled perimeter surrounding the camp proper helped isolate the grim central area from the townspeople, who had  initially been horrified at the beatings and torture they could see from their second story house windows in the original "wild" camp that sprang up in the town after the Nazis first seized power.

While standing in the high walled outer perimetter area, we looked at the SS barracks and heard the following from Ingrid: Sachenshausen was built as the "model" camp where SS officers were trained and then sent to other camps, such as Auschwitz. The officers were primarily young men, and individuals could opt out of participating in atrocities without penalty if they chose, such as by claiming a headache. Most did not. They were supposed to be an elite force, but apparently recruitment standards were not very high. 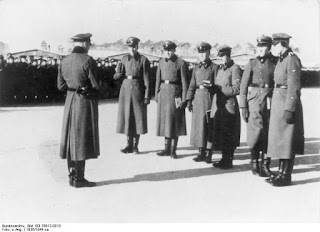 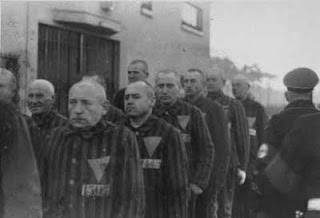 Most did not walk away from the camps, saying "no, this is not for me." Perhaps this is because they had been brainwashed into a belief in Aryan superiority and then given absolute power over the lives of inmates. According to Ingrid, as part of a new guard's initiation, an experienced guard would bring the new recruit inside the camp, randomly choose a prisoner and then beat him to death to demonstrate the lack of consequences. Guards had godlike power, as well as warm, sturdy well-made clothes, boots, whips, guns, comfortable lodgings, warmth and plenty of food. The contrast between their lives and that of the inmates was almost absolute.  They were told they were superior to other human beings,  part of a vanguard creating a new and better world. They learned they were the lords of the universe and that this situation would never change. What young man would not be tempted by this giddy offering of power and privilege?

Sadism was an everyday part of the social order. Ingrid told us that prisoners were brought into the perimeter to cut the potatoes for SS dinners  into the perfect circles that were the preferred Nazi aesthetic. Any imperfectly cut potato was thrown away and could not be eaten by the starving prisoners.

By this time the rain was pouring down furiously and the wind blowing, and we huddled together as a group, too sobered to complain of the cold as we crossed under the sign that said "Work will make you free" in German and into the camp itself.