Eye of the Tiger

So much of who we are is revealed in casual ways.

During a vacation, I saw a row of cards on display in a person's home.

Most of them showed pictures of tigers. I took them down and read them. Each one praised a person who had just graduated from college for hard work and dedication. Each one urged this person to be the "eye of the tiger." 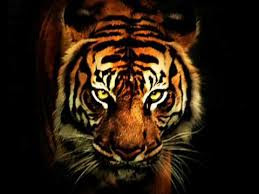 What does it mean, I wondered, to be the "eye of the tiger?"

In popular culture, the term means:


someone who is focused, confident, and has the look of being intense, somewhat cold but very fierce with a never say die attitude. ("Gratitude Guy)

It's also the popular  song associated with Rocky movies. Rocky had to develop the "eye of the tiger," the hunger and motivation to win and become a champion.

So when the parents, grandparents and aunts and uncles urged this college grad to have the "eye of the tiger," they meant to be focused on goals. They also meant being fierce and never giving up ("never say die.")

Because it is associated with a predator, the phrase can't help but suggest "going in for the kill." After all, the second "eyes" don't show until the tiger is ready to attack (kill) its prey.

I wondered what kind of ethic this is to urge in a young person. On the other hand, it seems a very "normal" way to think in American culture. We want to "win."

But are we "tigers," solitary, predatory animals? Social science teaches that humans are, above all, communal creatures. We are built to live in groups, and we function best in groups. We are very alert to social cues and try to be liked by other people. Being alone is one of the biggest predictors of early death. We are not mighty tigers. Instead, we are a species that is weak while all alone. We are built to depend on each other.

I imagine that the relatives of the college graduate meant to encourage being hardworking and striving for success. But it is troubling that the phrase has such a "killer" aspect. 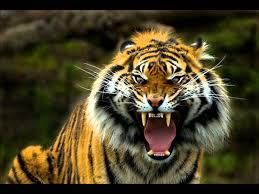 After all, tigers will soon be extinct in natural habitats, surviving only in zoos, where they are dependent on others to protect them.

Maybe being an aggressive predator is not the best path to success.

Maybe "kill or be killed" means you die.

People will tell me the phrase on the graduation cards is meant only in the most positive, encouraging way. It is meant only to build confidence.

All the same, I can't shake the idea that phrases like "eye of the tiger" promote a self-centered, aggressive attitude that is not realistic or helpful to society or the people in it in the long run. I wonder how much this kind of "off-hand" thinking, or unexamined habit of mind leads, with the even the best of intentions, to the coarsening of society. I don't need to mention that it jars against the Quaker ethics of community and caring.

What do you think? How do we push back?