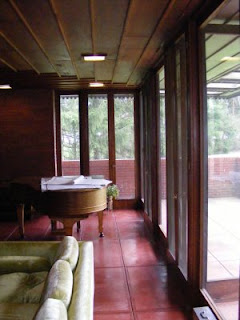 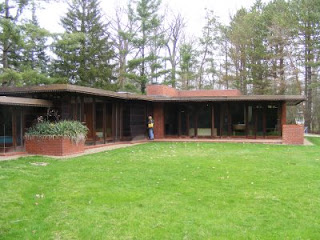 Last Sunday, I went with Roger and a student at Olney who is writing his senior thesis (called the Grady essay) on Frank Lloyd Wright to Oberlin to tour a Wright Usonian house there called the Charles E. Weltzheimer house.

Usonians were houses Wright designed, starting in the 1930s, to be affordable for the average American (Usonian is supposed to evoke "USA.") About 100 of these houses were built around the country and a few are open to the public. Usonians could well appeal to a Quaker sensibility because they are built with simple, clean lines out of ordinary, low-cost (at the time) materials, were meant to be homes people could build themselves and were designed with some awareness of what we would today call "green" building. (I wouldn't push that too far, but Wright did orient the houses to take advantage of passive solar). The typical Usonian is L-shaped and built on one level with a living room/dining room "core" centered on a large fireplace and then a "tail" of bedrooms and bathrooms.

This Usonian was large for the time (it was designed in 1947, built in 1948 and the family of five (soon to be six) moved in in 1949). It had four bedrooms, rare in that era, and two full baths. Also unusual for a Wright house, where kitchens are usually treated as small, utilitarian workspaces, similiar to laundry rooms, the kitchen is incorporated into to the living room plan.

Although the house is named for a man, it's existence is primarily women driven. Weltzheimer's wife wanted a Usonian and wrote a letter to Wright asking him to design one for her family. In the mid-1960s, the house, which had been sold to a developer, was "saved" by a female art history professor at Oberlin, who couldn't bear what the developer was doing to the house (Installing white formica countertops in the kitchen, etc.) and bought it from him. She willed it to Oberlin before she died in the early 1990s.

Unlike other Wright houses we have seen, this one is treated not as a shrine but as a working home. Oberlin groups come in and use the house for conferences and other meetings. You see electric blankets in the linen closets and a modern coffee maker on the kitchen counter. The entire house is accessible to visitors and you are allowed to sit on the furnishings, some of which are the original Wright-designed pieces. So you come away with at least a fleeting sense of what it was like to live in the house. At one point, our Olney student sat down at the Steinway baby grand piano and began playing the Truman Show theme (I call it the official Olney theme as it is always wafting down the corridor of our Main building!). Nobody minded at all.

It was an enjoyable trip and Oberlin was a beautiful campus. Of course, the house stirred my already overactive imagination, reminding me of descriptions of similar "modern" houses in my old Donna Parker and other childhood readings, where walls of windows in bedrooms opening to patios were the height of "glam" (and often viewed with suspicion by narrators who who seemed to prefer the cosy clapboards the heroines always seemed to live in). Well, today, the glam house looks like a dated period piece, but I think we still often find "modern" architecture suspect. Do you think this is true? If so, is there a good reason for this?

Also, I was quite taken with the story of the forward looking "woman" art history professor who saved the house and fancied her having gone to college with my Majorie Dean series cohorts in the 1920s. (Anybody else read this series?) If she was anything like Majorie and her friends, this professor would have been a New Woman type, athletic (daringly playing basketball), not afraid to become educated, and above all dedicated to higher purposes, such as truth, beauty and helping the less fortunate. In a word, the type of woman who would become a college professor and dedicate herself to saving a house.

The term "Usonian" was derived from Wright's acronyn for the United States -- USONA, or United States of North America. At the time, he felt "USA" would be confused with "Union of South Africa." Go figure.

I wish I could express the bizarre feeling I get when I visit a Wright house. It's like climbing into a painting, or somehow being physically inside a Chopin nocturne. I get very excited by the "Wright-ness" of the space.

Most people are very suspect of "modern" architecture, I think. I think most people would look at a Wright house and say, as my mother would put it, that "it was very nice, but not for people like us." Why not?