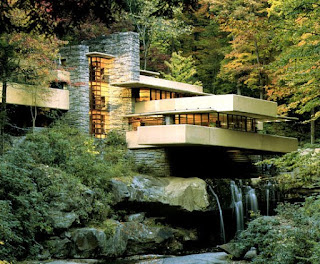 As I mentioned in a previous blog, I went with John Karsemeyer last fall to Fallingwater, probably Frank Lloyd Wright's most famous residence. John supplied the following reflection on Fallingwater. To Wright purists, he has blasphemed. What do you think?

"Fallingwater is now a well-run conservancy, a magical museum. The setting is stunning, the architecture brilliant. But it seems to me to be a revealing mistake, and directly contradictions Wright's professed love of nature. The Kaufmans themselves wanted the house under the fall, with a view to it. ...

"Wright--perhaps pathologically unable to allow nature to display itself with the delight that a small-but-very-beautiful waterfall effortlessly presents, places his design right on top of it! Symbolically dominating it. It is a conspicuously obscene display of ego. Rather than harmonize or blend, Wright seems to have needed to dominate his patrons, as well as nature itself

"... Wright was mistaken. The Kaufmans were correct.

"The house should not be where it is, and should be beside and below the fall, not perched triumphantly over it like an asymmetrical architectural predator subduing its helpless prey!"

Jon's comment that FLW was "pathologically unable to allow nature to display itself " is a bit harsh. Wright's thing was the the building "completed" the site-- that somehow Bear Creek and the house are not in oppostion to each other but actually complete each other. Fallingwater is a great example -- maybe the best example -- of this thinking. The house is truly integrated with the site, not just aesthetically but structurally as well. Fallingwater is a structure that quite literally could not be built anywhere else.

So no, I do not agree that the house should have been below the falls, nor do I see the house as a "predator." The house may be a supreme expression of ego, but it is undeniably beautiful, as well.

Actually, I’ve been enjoying your digression into poetry and architecture.

And I basically agree with what you hint at in your opening sentence here. Poetry and architecture, like religion, can function as measures of our capacity to respond with all of our selves to that which is far beyond our selves.

You are making Fallingwater into a Rorschach (inkblot) test for the rest of us here. When we look at it, and describe our response to it, what we are expressing is a measure of ourselves, much more than a measurement of the building.

John’s response to this scene speaks well of his desire to protect and honor nature. “rgrreyn”’s response, in my opinion, shows a better perception of what Wright was actually seeking to accomplish.

I wouldn’t call Fallingwater a display of ego. This is no McMansion plonked on top of a landscape where its shape does not fit. Wright’s house nestles into the hillside. Its lines, and its repeated slabs, echo the lines and slabs of the stone below. The drop-offs from the slabs of the house echo the drop-off of the waterfall. At the right time of day, the radiance of the house is to the shadow it throws on the cool water below exactly as the radiance of the sunlight on the trees is to the shadow they throw on the house below them. And that’s only the beginning of what goes on here.

John is responding to this house as many modern defenders of wilderness do: with a desire to leave what is left of the wild unsullied and recognized for the precious thing it is. That is a response urgently needed in our time.

But Wright, who lived in an age when this country was much emptier, did what the ancient Greeks did with their temples, what Monet did with his paintings of the railroad bridge at Argentuil, what many modern painters and photographers do when they capture images of that moment in evening when the lingering light in the sky is exactly in balance with the human lamps below. He expressed a vision of a world in which nature and humanity are not at odds, but married in the harmony of equality.

Interesting perspectives. I wonder if the Kaufmans desire to have their house primarily with a view to the fall could have been achieved without it having seen an imposition to nature, particularly given the size of the fall. I've never visited there, and I am pretty architecturally ignorant, so I don't know, but it seems a pertinent question to ask.

It brings to mind age-old arguments about grand cathedrals and such. Some are dead set against them, feeling the cost is excessive and the funds better spent. But if you have visited cathedrals, you have probably experienced that some of them actually do capture something about God.

It reminds me that we have a God who wants a relationship with us, not to set down a set of rules for us to follow and then watch to see how good we do at that. Sometimes the extravagant does come from living fully into the relationship, as with the woman who used expensive ointment to anoint Jesus' feet. And often it is ego. We must be in relationship to know in each instance.