Song of the Angels, Fox and Revelation 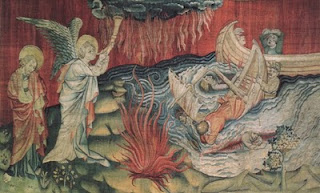 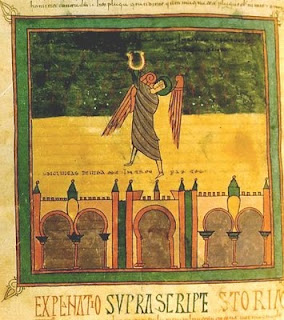 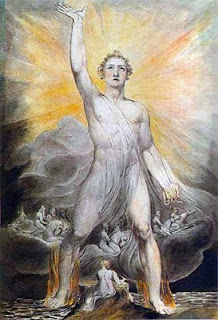 In the words of Peter Carrell, angels function as “heavenly beings distinct from God and from human beings, who exist to serve God as messengers, as the heavenly congregation at worship and as agents of the divine will.”

When I decided to travel into the Book of Revelation, I chose to link myself to the angels. In popular culture, these benign and non-threatening creatures flit invisibly through the air to aid and comfort humans. Perhaps they would—gently-- protect my journey through the violence of the apocalypse.

Angels abound in John's Revelation. If Eden existed as a serene garden, overseen by a single couple, with God occasionally strolling through to observe, Revelation’s heaven is a city, populated by a multitude.

In Revelation, however, angels provide little comfort: they are mighty, they speak in loud voices, they blast trumpets, and they wield instruments of doom. They unquestioningly obey the divine commands. They never argue with God over the horrendous damage they’re instructed to inflict on the earth. They are not Lot, pleading for Sodom and Gomorrah, and they stand in stoic contrast to John, who weeps when he thinks the scroll secured with seven seals can’t be opened. They’re not the graceful, winged bird-people of Renaissance annunciation paintings or the disarming cherubs of Baroque ceiling art. Instead, they are the powerful, masculine figures painted by William Blake.

George Fox wrote about Revelation and claimed to understand it. Its apocalyptic imagery saturated his writings as he anticipated the establishment of the New Jerusalem in his lifetime. Most interestingly, he interpreted Revelation through the lens of the peace testimony. He writes “Now the holy angels of God are spirits, so then they had spiritual weapons, and not carnal swords, muskets, pikes, and pistols, &c. to fight with the dragon.”

We're told to enter the "conical spiral" of Revelation imaginatively, and many artists have done so. Apparently, Fox did so, reading through its violent imagery to a message of spiritual warfare overcoming carnal weapons.

The William Blake painting above of a mighty, muscular angel with his arm upheld captures the imagery of Revelation's angels. I have also included a Turner painting, highly impressionistic, of an angel blocking the sun, a tenth-century miniature of an apocalyptic angel playing a zither in heaven, and a 14-century tapestry of an angel blowing the second trumpet, causing the seas to rage. None of these paintings, however, show heaven as a city teeming with angelic beings.

I particularly like the way the poems below echo the hard, grinding ethos of these angels who poured woe on the earth. This is how Revelation's angels look from below, from earth's perpective. In heaven, they are a different story, mighty and loud but part of the divine harmony, tens of thousands of them singing praises to God and the Lamb.

Interestingly, the first of the two poems below speaks of silence:

O, clanging choirs of angels,
pour your holy cataract of echoing silence
into our deaf listening ...

Yet, we as Quakers, don't gravitate anymore to this strange, poetic and sometimes terrifying book of the Bible. Why not? Should we reopen it?

What do you think of these angels? Of the book of Revelation? Of these poems?

Song of the Angels II

Earth axis grinds,
shutters of the netherworld rattle,
gates of Heaven creak in their hinges.

O, clanging choirs of angels,
pour your holy cataract of echoing silence
into our deaf listening,
rend our disused year with your high harmonies.

Song of the Angels III

Sword-carrier of justice
wings frosted by cold air of divine detachment,
before your implacable presence
our passionate lifeblood is stayed,
our ardent pulse numbed with terror.

Celestial strider, rider in glory,
pouring out vials, wisdom filled;
parched fields of our comprehension ravaged gardens bereft,
their fruits of knowledge fallen, gnawed by the worm,
stretch wide beneath your dew.

You, planter of the heart-tree,
ruby on your holy forehead, perpetually plummeting
charity from your infinite perspectives,
by your fire melt, you, our floes,
grip, you, formidable, in piercing pity, those roots.

Angel of the great Turning,
meet at crossroads the voyager,
step in the way of a mountaineer, flung into spiraling descent,
who wring from themselves lonely return;
your glowing joy is their viaticum.

Majestic messenger from the land beyond the river,
you, of fierce mercy, by our hair,
from the bowels of our yearning, pull us across.
Blow, on your resounding trumpet
splendor of sunrise in a new land.
Posted by Diane at 9:28 AM 2 comments:

Oswald Chambers My Utmost for his Highest, a book of devotionals published after his death in WWI, fascinates and perplexes me. In today's reading, he sounds much like a Quaker:

"When we become advocates of a creed, something dies; we do not believe God, we only believe our belief about him. ... 'Believe also in Me,' Jesus said, not 'Believe certain things about Me.' Leav[ing] the whole thing to Him, it is gloriously uncertain how He will come in, but He will come."

I see the problem with creeds that Chambers spells out: Our beliefs about God or what God "should be," can block our direct, unmediated experience of what God IS. Quakers are rightfully concerned about having that direct experience. However, I also understand how in Quakerism the lack of structure or framework can lead to a spreading, anything-goes dilution, like wine spilled out from a container. We learn in the Bible that we need new wineskins not no wineskins.

I also wonder if Quakers make an idol--or a creed--of not having creeds.

What do you think? Leaving aside our own sense that "creeds are bad," does it help or hinder Quakers to be adamantly against creeds?
Posted by Diane at 4:53 AM 20 comments:

I am working on Mary, as in the Virgin Mary, the mother of Jesus, and Quakerism. From what I can find, the Quakers have more or less routinely ignored Mary, except for early Quakers like Fox, who excoriated Mary worship as exhibit A in their challenge to idolatrous papacy. Am I missing any strain of Mariology in Quakerism?
Posted by Diane at 6:30 AM 4 comments:

Apologies for the long gap in posting, which has been a function of lack of internet access rather than lack of time or (heaven forfend!) thoughts ... :)

John Dominic Crossan, author of The Historic Jesus, visited ESR this weekend and was a riveting speaker. He placed Roman ideology side by side against early Christian ideology. The Roman ideological (or theological) paradigm was war leading to victory leading to peace leading to (distributive) justice. In other words crushing the enemy established peace and in a peaceful world society could be ordered in a just way so that people's economic needs were met. Jesus and his followers claimed that to achieve peace and justice, one had to start with non-violence. Non-violence leads to economic justice, which in turn leads to peace. Needless to say, we know which paradigm still dominates today.

Caesar Augustus was worshipped as human and a divine, a God and a son of God because he unified the Roman Empire and brought peace through victory. Jesus, Crossan says, who brought peace through non-violence, was worshipped in the same terms because those were a construct a first century audience in the Roman world would have understood. Further, people in those days would not have challenged Jesus' resurrection--"wonders happened all the time"'--but would have asked, " what does it mean for me? What will it do for me?"

Crossan's most important point--and one he pounded on (and one I happen to strongly agree with)--is that history matters. Jesus arrived in a moment of opportunity, where, because of historical circumstances, his ministry was allowed to flourish for several years. Twenty years earlier or later, Crossan said, and he would have been crushed instantly. That brought mind to the Quakers and their emergence at another "window" of opportunity--the era of relative religious freedom during Cromwell's reign. Twenty years earlier or later and they would have been flattened by a state apparatus designed to keep people in conformity with the dominant ideology. (I might conceptualize this a little differently but that's for another post.)

I remember several times hearing people say, "If George Fox had been born in China, he would have been a Buddhist." OK ... yes, one's faith expression is obviously influenced by one's society. But the point is, George Fox wasn't born in China, Spain or the Ottoman Empire but England. History matters. I remember Tich Nat Hanh writing that if Buddha had lived in the Roman Empire, he, like Jesus, would have been crucified. Well, perhaps ... but the point is, he wasn't. If he had been, I imagine Buddhism would be much different today.

So I wonder: what would Quakerism look like if we were more willing to embrace the possibility of miracle and more rigorous in insisting that history matters? What miracles do we miss? What realities do we distort?
Posted by Diane at 5:50 AM 15 comments: