I was saddened and shocked to learn that two people were killed today at the Columbia Mall by a shooter who then killed himself.

I have been going to Columbia Mall since my family moved to Howard County, between Baltimore and Washington, when I was 14.  In those heady days, the clothes store Paraphernalia with its space capsule dressing rooms and deep purple clothes stood catty corner from Bun Penny, a gourmet coffee shop. Upstairs boasted a sit-down Polynesian restaurant and the locally owned Smuggler's Attic (or was it Nook?) where you could buy round candles in layers of purple and orange or fish nets to hang from your ceiling. You could lunch at Hochschild Kohn's Lemon Tree, done in a decor of bright limes and yellows or shop at Woodward and Lothrop's, which we believed would be there forever since the store actually owned, rather than rented, their space.
Columbia was and is a planned city, the brainchild of the visionary James Rouse, who wished to design a livable community of the future where all classes and races could live together in harmony. Though Rouse has often been portrayed as an unrealistic dreamer, locals who knew him remembered him as a hardheaded businessman--when, for example, the popular restaurant, Mrs. Z's, burned down, he didn't just write a check to reopen it. Mrs. Z had to come up with her own funding and a viable business plan--and when she decided not to, life went on. Rouse didn't bail her out.

Rouse brought blacks and whites side-by-side in middle class suburban neighborhoods even before the Fair Housing Act was passed. Stories abound of him refusing to sell lots to say, three black families in a row--he would insist a white family live in between. He was legendary for opening his Wilde Lake home to the community for block parties to which everyone was invited. His was an "executive" house for the time--but that meant four bedrooms instead of three, a few glamor architectural features, and a lake view on an otherwise ordinary quarter acre lot. In Columbia, you can trace the descent from the 1960s, when "executives" were ordinary people with a little more money--living in the same neighborhoods!--to the grossly oversized gated MacMansions of today. 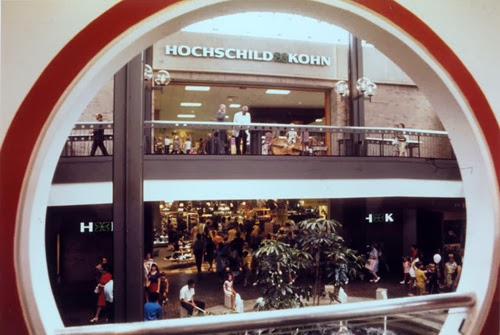 I've spent parts of my life going to Columbia Mall, and sometimes, depressingly, felt I measured out my life in shopping malls. I even worked at the Mall for a stint, at Bun Penny. I shopped at the Mall, met friends there, ate there, laughed there, ran into people there, was lonely and excited there at different times, in the 1980s brought my then-fiance Roger there to see the Christmas poinsetta tree--and naturally, brought my kids there. When my children learned in school that Martin Luther King gave his "I have a Dream" speech at the Mall, they naturally thought it was our mall.
The mall changed over the years, expanding and becoming more upscale. I remember in the 1990s, when, after James Rouse died and Columbia was sold to a corporate interest that the new mall management raised rents. They said they wanted to oust the long time local owners, the people who lived and invested in the community, whose customers were their neighbors. It was not malice, but business. Dealing with individual business owners was inefficient, the new mall management said. The parent company owned a string of malls, and it was easier to have the same chain stores in all of them.  The locally owned camera shop went out (perhaps fated to go anyway), the locally owned toy store shut its doors, Bun Penny, the beloved gourmet coffee store, closed over the high rents. McCrory's not a local business, but a nod to a time when the mall could accommodate a discount place alongside upscale department stores, disappeared.
In all the days I tramped from one end of the mall to other, I never once dreamed of a shooting. But why should this mall be immune? I can't help but reflect, however, that this shooting at THIS mall, in a place so wedded to a vision of what life could be, shows so starkly that what we are experiencing now, in Columbia or elsewhere (I moved to Ohio in 2008) isn't the future Rouse dreamed of or what Columbia (or imo, the U.S.) was meant to represent.
The mall instead reveals what we have become. It is bigger and posher than ever now.  It's more crowded than ever, too, in part due to the kiosks that occupied the center area in the 80s, when the profit mania took off. And now it has become a place where people are murdered.
"Without a vision the people perish." The second half of that, from Proverbs 29:18, is that those who keep the law will be happy. Isn't "the law"--a set of rules set in stone--antithetical to the idea of a creative vision? Not really--what that passage says--at least one meaning--is that a creative vision must first of all be rooted in the idea of a shalom community the law is meant to embody. Without  such a vision binding people together as one people, all in it together, greed and anarchy tear us apart. James Rouse's concept of social harmony and equal opportunity becomes a shoot-out at a skate shop.
How do we find a better vision? Quakers have so much to offer in this situation. We know how to build community,  and we've already crossed the Rubicon on peace. Of course, it's not just Quakers who have a vision of a peaceful society rooted in shared community--so how do we think about this and live this and write about this imaginatively in ways that are not sentimental or nostalgic but truth-telling and future oriented? How do we move forward to a time when being randomly gunned down in your mall is as inconceivable as a public hanging there?

Two days before Christmas, I went with Nick to Zanesville. After some last-minute morning Christmas shopping, before the stampede arrived at the Zanesville mall, we headed for the long drive home. Only a few minutes out on the highway, the car lost power. I drifted onto the shoulder and  entered into a flurry of phone calls--to Roger, to AAA and to the local AAA person.

Finally, the man with the tow truck arrived, and towed us to the nearest shop. The people at the shop advised us to have lunch--by this time it was 1:00--at Terry's Tavern just a block or two away by the railroad tracks. Was it OK for us to enter such a place as strangers? I asked. Yes, I was told, they are very nice and have great food.

We headed out in the cold and wind and walked along a desolate strip of warehouse type buildings until we reached Terry's Tavern, literally right next to the railroad tracks. The advice we were given was good--Terry's was welcoming to us.

The food was also good--home made, "real" food--and the prices were inexpensive.

In entering Terry's Tavern, I couldn't help but believe we had stumbled on a secret. I never would have found Terry's on my own. Even if I had noticed it driving past, its isolated location by railroad tracks and "down home" look would have said "don't enter." Probably, unostentatious as it is, I never would have noticed it. Even more likely, I never would have been on this warehouse row but on the main drag, with its string of fast food places and national chain restaurants.

So a sense of grace surrounded entering this haven. I wouldn't have been there without a personal contact, fleeting as it was. Ironically, I wouldn't have been there without the unforeseen and intensely irritating situation of my car breaking down. I kept thinking about Harry Potter, a series I  I interact with skeptically and warily, but I do accept how powerfully the books plug into archetypes. In Terry's Tavern, I saw Diagonal Alley, hidden in plain sight, or platform 9 3/4, accessible to those in the know. How much "magic" of the ordinary variety do we miss that is right in front of us?

Being in Terry's was a Christmas gift I couldn't have predicted or controlled.

Finding these places feels spiritual to me, a metaphor for the half-seen world I imagine dancing all around us, just behind the thinnest of veils blowing in the breeze. I remember once taking a walk around a local lake in Maryland that I had circled dozens and dozens of times, often while pushing a baby stroller. This time, as I was wending my way around it, I felt moved to cut across a grassy lawn and enter a wooded area. I found a narrow trail there and followed it. It led to a neighborhood strictly cut off from ours due to the vagaries of local politics--the only way I had previously known to enter this neighborhood was to drive. And yet here was this trail! How could I not have known about it? Again, I had a strange feeling. I had almost been blown somewhere on a wind. The imaginative and literal met.


I have difficulty putting into words this sense of finding evidence of the unseen in the concrete. Have others had these experiences? I believe they must be common--and uncommon. Since I am writing this on New Year's day, I am making a note to myself to keep attuned this year to the numinous. Or try to. :)