On Monday, I head to Germany to do Bonhoeffer research. My research will be largely journalistic, putting my fingers in the nailholes of Bonhoeffer's life. I will be visiting places that were important to Bonhoeffer's development, including Berlin, Finkenwalde, the Harz Mountains and Tubingen.

Bonhoeffer moved to Berlin at age six. “The decisive influence,” wrote Bonhoeffer's biographer Eberhard Bethge “was Berlin and its complex diversity: the imperial and Republican city that slowly succumbed to Nazism, the liberal and ecclesiastical, the conservative and cosmopolitan Berlin, with its academic and working class sectors, its concert halls and museums; the Berlin of street brawls and political plots.”

In Berlin, the family first lived in Bruckenallee, near the Bellevue rail station, adjacent to Bellevue Park, a district north of the zoo. They had a view of Bellevue Castle.

In 1916, the family moved to Grunewald, living at 14 Wangenheimstrase from March 1916 to 1935. They moved there to grow food during WWII. This is the yellow house pictured to the left. 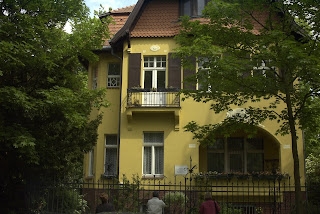 In 1935, the parents moved to Marienburger Allee 43, Charlottenburg.

Friedrichsbrunn in the Harz mountains, where the Bonhoeffer family had a summer home, will be another destination. In prison, Bonhoeffer wrote: "I live a good deal in nature, in the glades near Friedrichsbrunn, or on the slopes from which one can look beyond Treseberg to the Brocken. ..It is the Harz, the Thuringian forest, the Weser mountains, that to me represent nature, that belong to me and have fashioned me." Harz is as well the magical forestland of Grimm's fairytales.
Bonhoeffer studied for a year Tubingen, spending some of his time with his grandmother Julie Tafel at 38 Neckarhalde. Here Jukie had a balcony where she could lay in the sun.

As Director of the Finkenwalde Seminary, Bonhoeffer found his life's work. Finkenwalde is now part of Poland and called Zdroje. The seminary building, an old manor house, was destroyed at the end of World War II but a Bonhoeffer center now exists on the site.

As I planned the trip, the level of destruction wrought by World War II became more real. So many of the buildings where Bonhoeffer spent his time no longer exist. This makes Tubingen, which was spared bombing in World War II,, the Harz mountains and other natural terrain such as the Baltic Sea, all the more important.
Posted by Diane at 6:05 PM 3 comments: