In Chekhov's The Cherry Orchard,  a family's fortunes become more and more dire, and yet the family is unwilling to sell its valuable cherry orchard. It refuses to cut down even part of the orchard. At the end, the bankrupt family must sell their estate. The first act of the new owners is cutting down and selling the entire cherry orchard. 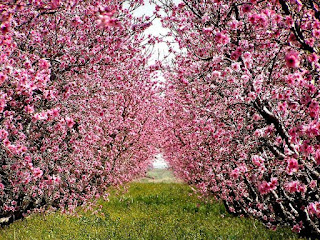 Olney Friends School needs $250,000 to stay open. This is a small amount in the grand scheme of things, but would make an enormous, a vital, difference in the life of the school. If the school closes, and is sold, this "cherry orchard" will be lost forever. Or to mix the metaphor, this Humpty Dumpty can't be put back together again. Once gone, it's gone. It's really gone. The complexities and expenses of reopening would cost far more than $250,000.

It almost goes without saying that Olney changes lives. My three children attended the school. It was a game changer for them. They met and made friends with students from around the world. Rooted in the local, their vision became global. They received a level of attention and had their intellects excited in a way that will be with them for a lifetime. They lived Quaker values.

We've already lost one Friends' boarding school, the Meeting School in New Hampshire. Very few are left: Westtown and The George School in Philadelphia, Scattergood in Iowa, and Sandy Spring in Maryland, which is mostly day students.

If Olney closes, it will also be a huge blow to future students and to Stillwater Monthly Meeting. Though the school is no longer under the care of Ohio Yearly Meeting, Stillwater and Olney are tightly intertwined. They share spaces, and the staff and students of Olney provide vital blood and energy to the meeting. A dead, shuttered campus or a campus bought by interests antithetical to Quakerism would change the Meeting in incalculable ways. The Meeting would almost certainly no longer have the infrastructure to host Quaker wide events, such as QuakerSpring or the Conservative Friends gathering.

Moving back to The Cherry Orchard metaphor, what might--what almost certainly--would be the first move of the  new property owners? Selling the valuable fracking rights--and with who knows what restrictions? Maybe next to none. Maybe the whole point of the investment would be to extract the gas below as lucratively as possible, no matter what the environmental damage. Stillwater Meeting could find itself next to 1000 watt neon lights and tall pumps working 24/7. Olney, now a certified organic farm could quickly become an industrial wasteland. This is not dystopic fantasy but a real scenario.

So far, the school, despite its financial issues, has resisted signing a fracking contract.  However, that's an option, and one that, at least in the hands of the school, could be controlled and done with decency and restraint--and the school would survive. Nevertheless, it is an option the school is trying with all its heart and soul to avoid.

It feels that it would be a win for the corporatism and homogenization of world culture, the replacing of thousands of small independent visions with a single, totalizing worldview, if Olney folded. It is a place that has stayed true to itself over the decades. It remains a very down-to-earth place, though most of its graduates get into good colleges--and getting into college is a graduation requirement. It hasn't cut corners on what is important, such as making its own food and organic farming or being there one-on-one for every student. The entire staff has traded income, most living very simply so as to make the school as close to an ideal place as it can. The school provides a counterweight to a society in which profit, self and violence are proclaimed as the paths to success.

Olney Friends School has over the last century built layer upon layer of Quaker traditions. The traditions are tied to the location.  As Wendell Berry and Native Americans would state, local roots are all important. There is a history here and a community that accretes over time and can't simply be manufactured like the latest MacDonalds. It can't just reopen somewhere else.

Olney operates on a shoestring: nobody is getting rich or even modestly upper middle class from this investment. Yet its thousands of students have enriched the world. As with the Sanders campaign, or the community that pulled together in It's a Wonderful Life, many small donations (and a few large)  add up. If you donate, you will be helping to make the world a more humane place. To donate, you can send a check made payable to Olney Friends, 61830 Sandy Ridge Road, Barnesville, Ohio, 43713 or link to the donations page at http://olneyfriends.org/support-olney/. You could also phone in a contribution or call for more information at 740-425-3655.
Posted by Diane at 10:48 AM 6 comments: