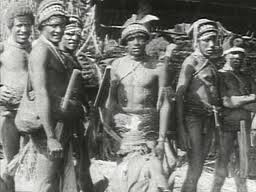 I recently read an article for my "Interfaith Dialogue" class that was simultaneously interesting and disturbing. Written by anthropologist Ian Hogbin in 1947, it was called “Pagan Religion in a New Guinea Village.” Among other things, it showed how cynically people can exploit religious fears to seize and maintain power.

The New Guinea men studied by Hogbin wanted separation from—and hence power over— the women in the tribe: They wished to exclude the women from their “cult.” Why? This detail Hogbin never explores--he apparently never raised the question. However, he explained that the men created a story of enormous crocodile spirit monsters that the women and children had to keep away from. He also explained how the men were able to make this utter fabrication credible.

A woman came home one day and freely shared with her husband her discovery of a whirring sound created by twirling a twisted piece of wood on a string. He told her to keep her discovery a secret and passed the information to his male cohorts. They decided to say it was the voice of a spirit that the women must stay away from. Of course, to carry out this fraud, they had to kill the woman who brought them the knowledge. As Hogbin puts it:

The husband was first reluctant but at length gave consent when promised a substitute. He sent a message to her to bring his supper and as soon as soon as she stepped on the ladder of the house the men”—in Hogbin’s polite term—“despatched her”—ie, murdered her—“with their spears.” The men told the rest of the women that “she had been eaten by a fearsome spirit monster which had come into the area”—a monster whose presence was heralded by the bullroarers. This falsehood in place, the men could easily keep the women intimidated.

For reasons he doesn’t explain, Hogbin rather quaintly makes the following inexplicable statement:

The story may perhaps give the impression that the hoaxing of the women was uppermost in the men’s mind when carrying out their ritual. … I am convinced that, although this aspect of the matter cannot be ignored, it would be a mistake to pay too much attention to it.

At this point, Hogbin dropped the subject and moved on.

I think Hogbin erred not to pay much more attention to why the women were hoaxed, why that was acceptable, why religion could be openly built on a fraud that used fear to exclude women from power and why the men feared sharing their power with women. Why was murdering an innocent woman acceptable? This is the kind of behavior we openly condemn when it’s practiced by Nazis. I am glad Hogbin did not suppress it, and hence romanticize “primitive” religion, but I also wish he'd spent more time exploring the issue.
The question I have is: Why did these men want to exclude the women? Why is that, across cultures, men seem to want to keep women out?
Posted by Diane at 6:35 PM 2 comments: