Christmas wish: If only we could rely on private charity


In Hans Christian Anderson's "The Little Match Girl," an impoverished child freezes to death sleeping on a door step in Christian Copenhaen.

In Dicken's A Christmas Carol, Tiny Tim would have perished for want of good food and medical attention in Christian London if not for the miraculous transformation of Scrooge (in a story that never advocates changing systemic social injustice). In 19th century and early 20th century Christian countries, children went hungry and dressed in rags, and many people died young of preventable diseases--despite all the growth in wealth brought by industrialism and despite the many efforts of well-meaning Christians and others. The needs were simply overwhelming. Even today, in Third World countries without a social safety net, poor people live harsh lives that Christian charity has been unable to come close to ameliorating--in Kenya, a country the British colonists once divided amongst religious groups, including the Quakers, a friend tells me that a Kenyan without money will be left to bleed to death on an emergency room floor, dying while nurses step over him.


In Middleton in Transition, anthropologists writing in the 1930s outline the almost impossible struggles of private charity to plug the hole the Depression blew in the local economy. A social consensus arose in which landlords did not evict unemployed tenants--and were tacitly relieved of contributing to the many charitable drives designed to stave off starvation. But not until the New Deal sent government money and centralized programming to the town--in reality, Muncie, Indiana--could the aid begin to meet the needs of the local population.

Yet friends or acquaintances of mine often mention their desire that private charity replace government social programs. The government, they say, is not supposed to be in the aid business. Government charity usurps the role of the churches and other religious institutions. If the government did not steal people's money and spend it against their wishes, they would have more to give to deserving causes. If the government would get out of the way and stop dispensing food stamps and Medicaid, the churches could step in and take over, distributing aid with love and individualized care, not bureaucratic coldness.

This is a compelling counter-narrative to the welfare state, and oh, how I wish it were true. If only churches and other religious groups could handle a society's charity: feeding the hungry, sheltering the homeless, clothing the naked. Yet history, as outlined above--and present day experience--tell me this is a fantasy.

We are a much richer country now than in the 1930s, some will argue, and have learned the lessons of the debilitating dependence wrought by the welfare state. We would step up to the plate. But would we? If we would, why haven't we? If we could, why is anyone applying for government aid? I would be more comfortable with withdrawing the aid if it happened in such a way that need for it withered on the vine. Rather than doing  away with SNAP (food stamps) I'd rather see a situation in which private charity was so generous that nobody would think to turn to the government. However, I don't think that world--that shalom kingdom-- is on the verge of emerging.

I fear that for all the talk, if the government were to withdraw what is left of the social safety net, that first, many people would not "snap to it" and hustle into work, because work would not be available to them for any number of reasons. I fear many would become ever more  hungry, ragged and homeless, and that we more comfortable souls would become inured to a situation in which great groups of the poor lived miserable lives. I fear that rather than give sacrificially to meet need,s churches would withdraw, as churches do, and insist their mission was to save souls, not bodies. Even the Quakers, feeling the financial pinch in America during the Depression, balked at giving German Quakers the aid they needed to help people, including Jews, during the crisis of National Socialism. American Quakers, as outlined in the book Quakers and Nazis, remembered the "rice Quakers" in Germany after WWI--those who converted just long enough to get fed--and fell back on the idea of providing spiritual nurture, asking the German Quakers to become materially self-sufficient and help themselves.

How would this not happen across the board if the government safety net were removed? If churches and mosques and other groups could deal with the needs without the government, wouldn't they have done so already? Wouldn't there have been no need for a welfare state? My concern is that when people are asked to dispense aid on a personal level--and when it is voluntary--judgmental attitudes quickly kick in. People in need suddenly "don't deserve" help. Jane Austen nails this mentality--all too human--in Sense and Sensibility--when, urged on by his wife, the half brother of the Dashwood sisters quickly reinterprets his father's dying wish that the son help his wife and daughters in order to be able to do as little as possible.

I also worry that the growing trend towards private charity leads to distinctions in which those who are personable and attractive and popular get help, while those who aren't get left at the wayside. As a religion reporter, I covered a number of silent auctions sponsored by churches to help a family with large cancer treatment bills. Inevitably, it was an attractive family being helped, a family that people identified with --usually young, with young children, and active and popular in the church. I often wondered if the same effort would be made for the nasty older woman that people avoided or the elderly man who pissed himself or the pain-in-the-ass woman who was always complaining about her dietary needs--or the family that didn't do much for the church, with the kids that were a little heavy and clumsy. I imagine people would want--or think they wanted--to help--but would they always be too busy to organize, too overbooked to attend the auction? I remember a vulnerable young woman dating a young man I used to work with. She was heavily involved in saving abused horses. She told some people I worked with about a fund raiser--they eagerly promised to attend. Not one showed up, remembering at the last minute other commitments, or that they were too tired. I don't know if she was hurt, as she never came to our office again--but I imagine she was, and I imagine the well meaning people simply didn't like or identify with her enough (she had acne! she was a little needy!) to make the effort. These are realities.

But, people will tell me, more people would convert to Christianity if they had to turn to the Church for their physical needs. I don't believe this. I call this sick Christianity. I believe that having to mouth Christian pieties to get a meal alienates people from Christianity almost more quickly than anything else, a sentiment documented by writers such as George Orwell who lived among the way the "down and out" in London in the 1930s.

So, while Christmas conjures up an image of generosity, love, goodwill and private charity, I for one will continue with all my heart and mind and body to support the welfare state--for it is, I believe, a gift from God that allows us to make life better for all people, a way to bring goodwill to all men and all women.

What do you think? What would it take for faith groups to provide for people's needs? Is it possible?

Olney Friends School has decided not to lease its land for fracking. Although this means walking away from hundreds of thousands of dollars, the school community believes this choice is most consistent with its testimonies and its commitment to stewardship of the land. The school has suffered financially as a result of the recession, which makes turning away the money all the more difficult. Olney has no large endowment to fall back on.  I will watch with interest as this unfolds, to see where "the ocean of Light" may be at work. 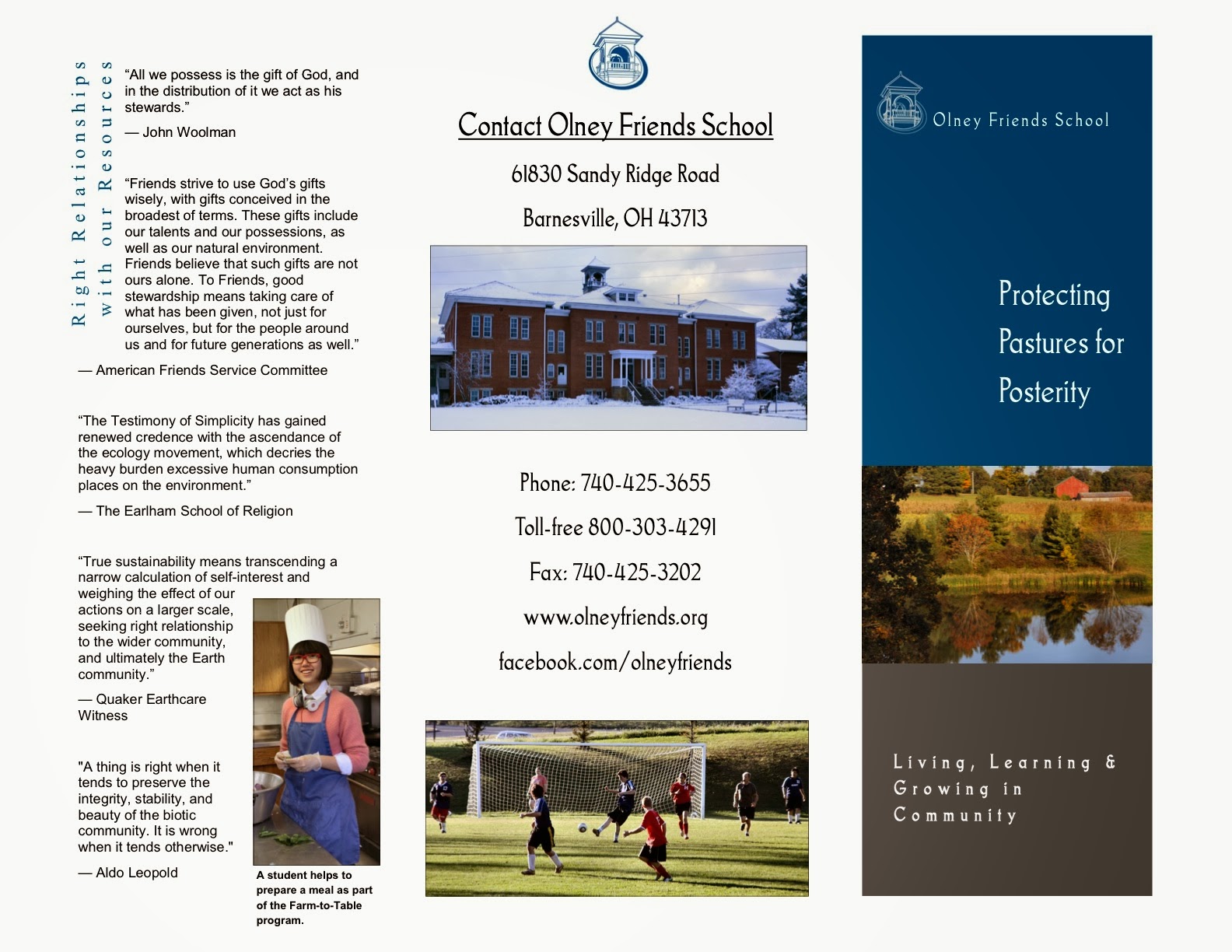 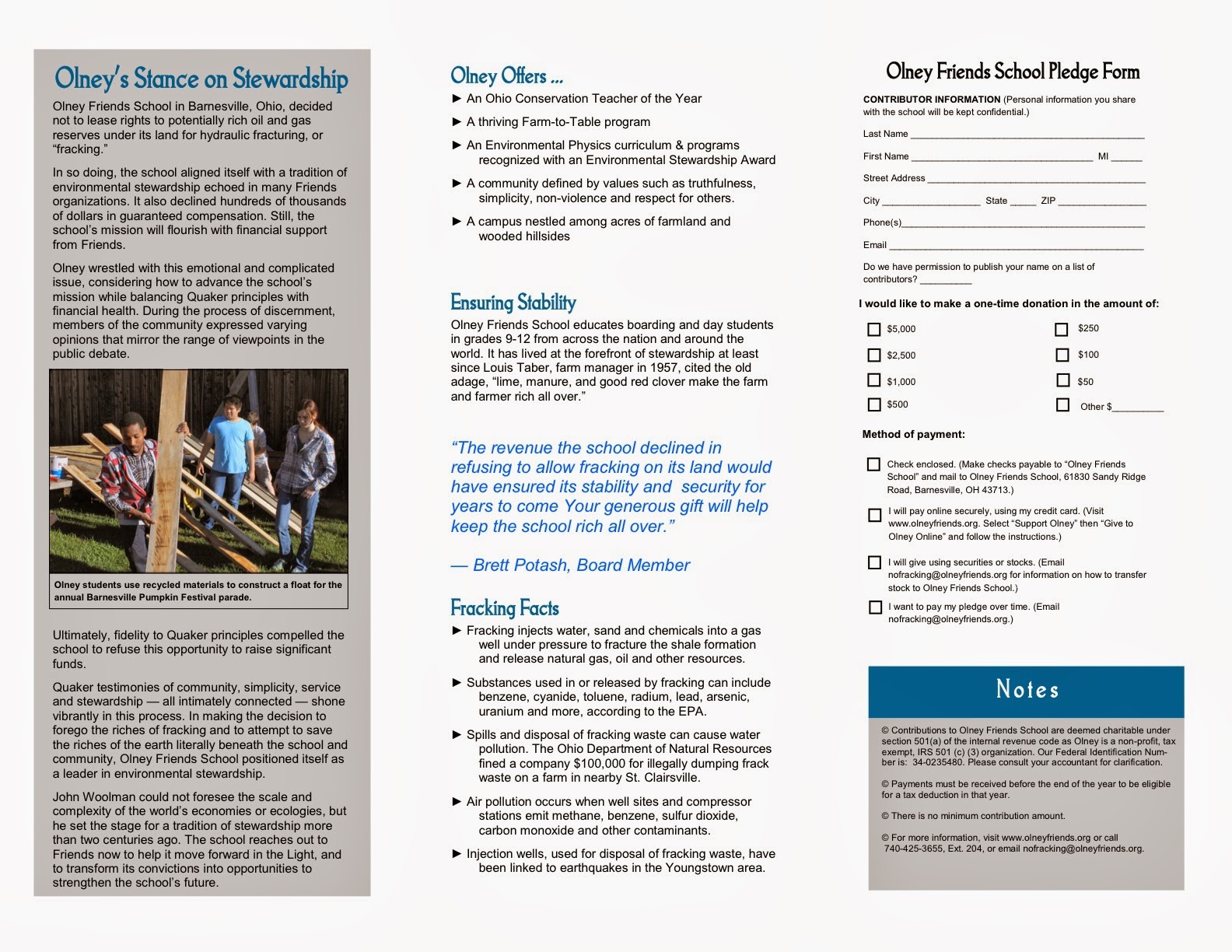