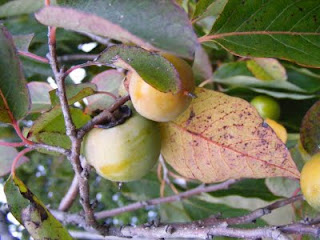 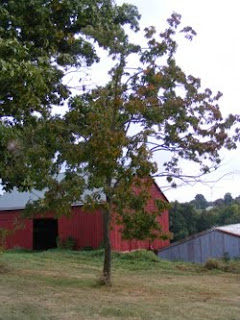 This time last year, after I had been living the bucolic rural life for about, say, six weeks, somebody asked me: "Are you going to put up your persimmons?"

He must have seen the blank look on my face because he said, laconic, "You know, you've got that persimmon tree in your yard by the barn. Little tree. Looks like it's got a lot of fruit this year."

Oh--and he was asking me if I were going to can the persimmons.

Now I know people in the suburbs "put things up." But what on earth is a persimmon?

I don't think I'd ever seen one. In fact, I thought they were some exotic fruit that grew in, say, England. You know, like gooseberries. The kind of thing Benjamin Bunny might eat in Beatrix Potter. Of course, I'm the person who some years ago took mulberries to my Quaker meeting because I didn't know what they were and my daughter had eaten some from a bush in our yard. As they say, you never stop learning ..

I went outside later and looked for the persimmon tree and sure enough, there it was, a little tree by a bigger tree by the red barn. And yes, little golden fruits that looked like yellow cherry tomatoes dangled amid its leaves. Persimmons. My body of knowledge had just once again increased.

I ate one just to make sure. I've been much bolder about eating flora since I wrote an article on poisonous plants in which I learned that it's exceedingly rare to die of plant poisoning the U.S. in this day and age. (Unless, of course, you're that young man in "Into the Wild" ...)

The golden fruit was sweet and soft inside. Good. I gathered some and ate some more, figuring, macrobiotic, anti-oxidant, what could I lose. I never did put them up. I think other people might have gathered them. Or the birds.

In any case, this year I went out and looked at my persimmon tree, and lo and behold, fruit was forming. It's wonderful--Edenic really--to have the earth produce such bounty without any effort on my part. I tried a persimmon. Not ripe yet. But soon enough.
Posted by Diane at 2:20 PM

Yes. I would imagine you're enjoying the setting in which you live. We miss it in the suburbs. And I'm not all that familiar with what you speak of here. Interesting.