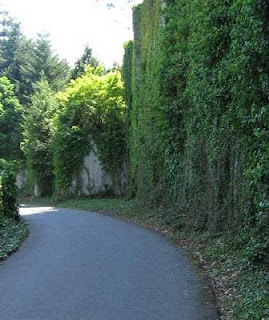 Despite all the critics who told me ivy would "ruin" our walls, I planted ivy on either side of our front door in Maryland seven or eight... or nine ... years ago. I planted a clipping from a friend's house in Oil City, Pa. Over the years, independent lawn contractors have approached me once or twice and offered to "get rid" of that ivy for me. Friendly eye roll. It's an aesthetic thing. Now, I feel vindicated:

"In a three-year project, Oxford researchers analysed the effects of ivy growing on buildings in five different parts of England and discovered that the plant plays a protective role. They found that an ivy canopy was like a thermal shield, combating the extremes of temperature which often cause walls to crack.
English Heritage commissioned Professor Heather Viles of Oxford University's School of Geography and the Envrionment to analyse the effect of common ivy (Hedera helix) to guide them in their important role as the steward of hundreds of historical sites. Professor Viles’s research team monitored the effect of ivy on walls situated in different parts of the country with varying climates and challenges.They found that ivy acted as a thermal blanket, warming up walls by an average of 15% in cold weather and cooling the surface temperature of the wall in hot weather by an average of 36%. The ivy was also found to absorb some of the harmful pollutants in the atmosphere. Walls where ivy was growing were less prone to the damaging effects of freezing temperatures, temperature fluctuations, pollution and salts than exposed walls without ivy.
Professor Viles said: ‘Ivy has been accused of destroying everything in its path and threatening some of our best loved heritage sites. Yet these findings suggest that there are many benefits to having ivy growing on the wall. It not only provides colourful foliage but also provides walls with weather-proofing and protection from the effects of pollution.’" (http://www.physorg.com/news193055372.html)

I would note that I have learned that it's best to plant a native ivy or ivy-like vine rather than invasive English ivy (if you are outside of England).

This was a case of following the heart. I know we have to think with our heads as well as our hearts, but are there times you wish you had or hadn't followed "prudent" advice, such as don't grow ivy on your walls? Or something more important?
Posted by Diane at 5:42 AM

I also often ignore "prudent" advice. In fact, I almost always ignore advice. Sometimes it works out in my favor. Sometimes...not so much. But I'd rather own my own regrets than sell them to convention.